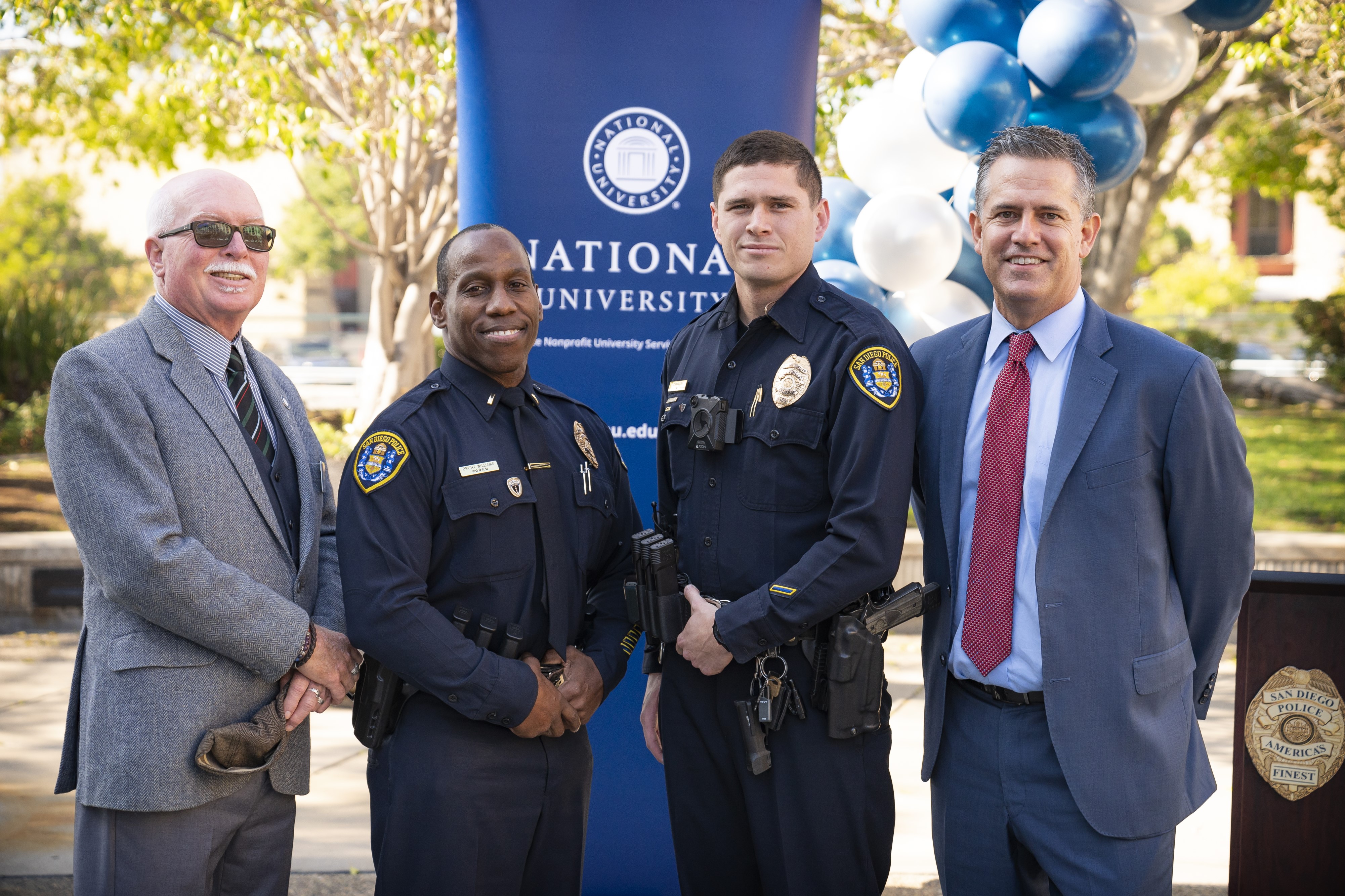 San Diego, CA – National University, which is identifying new degree pathways aligned with workforce development and industry demands, such as incorporating prior learning experiences, is making its degree programs even more attainable and cost-effective for public safety employees by applying credit earned through state-approved training academies. By incorporating prior academy education, the length of time to obtain a degree from the private, nonprofit university and the cost of a degree are substantially reduced. In some cases, the tuition scholarship is reduced by 40 percent and the time to obtain a bachelor’s degree is less than a year.

The credit alignment offer, initially launched in California, has been the most impactful on the Bachelor of Science Program in Criminal Justice Administration, which articulates training credit approved by the California Commission on Peace Officer Standards and Training (POST). More than 600 agencies participate in the state-approved program according to the POST website, and under the University’s new offer, qualified law enforcement will automatically have fulfilled seven of the criminal justice degree program’s 16 upper division courses, in addition to one lower division class, for a total of eight courses. Combined with National University’s four-week class format, students can now earn the bachelor’s degree in Criminal Justice Administration in just over three years – or as little as eleven months if the student has earned an associate degree before enrolling at National University. In addition to the criminal justice degree, graduates of POST-approved academies may also qualify to waive credit for degrees in Public Administration and Homeland Security & Emergency Management.

“Through this initiative, students will be able to save substantial time and tuition in their journey toward a bachelor’s degree, and that is a goal that National University is dedicated to expanding and exploring on behalf of all students,” said Dr. David Andrews, President of National University. “National University is pleased to be offering this opportunity to members of law enforcement and public safety as part of a wider institutional focus on personalizing the higher education experience.”

A 25 percent tuition scholarship is being a made available nationwide to employees of public safety agencies and 10 percent tuition reduction to their dependents to pursue a degree from any of National University’s more than 100 programs. For qualifying sworn officers seeking a bachelor’s degree in Criminal Justice Administration, the 25 percent National University tuition scholarship can bring the total cost of the degree to as low as $12,000 when factoring in employer tuition reimbursement programs. These time and cost-saving opportunities are available at campus locations, and online, through National University, which is accredited by the WASC Senior College and University Commission.

This unique offer to law enforcement and public safety employees is being publicly announced by the University on January 9 – Law Enforcement Appreciation Day, from San Diego Police Department headquarters and will include various law enforcement officials.

“I am very excited for the opportunity National University is giving the men and women of the San Diego Police Department. As a corporate partner with the City, they are offering our employees and their dependents a more affordable option to pursue higher education while also accommodating those who have non-traditional work schedules.” San Diego Police Chief, David Nisleit.

In addition to the POST academy credit alignment, National University also articulated prior learning credit agreements for graduates of a California State Probation, Parole or Corrections Academy. Adolfo Gonzales, San Diego County Chief Probation Officer and National University alumnus stated, “I am pleased at the development of initiatives such as this one that provides pathways for sworn and non-sworn law enforcement personnel to advance their educational and professional development.”

National University’s online Master’s Degree Program in Criminal Justice is ranked in the Top 20 nationwide for Best Online Graduate Criminal Justice Programs in the nation by U.S. News & World Report. Dr. Jack B. Hamlin, a former police officer, defense attorney and Superior Court Judge Pro Tem now serves as Department Chair and Professor in National University’s School of Professional Studies, which houses the Criminal Justice Administration degrees, among other degrees. He notes that a college degree will enhance an officer’s opportunity for promotion by achieving intermediate and advanced P.O.S.T. certificates. Looking to the future, an officer contemplating retirement has many more post-retirement employment opportunities with a degree. He also noted that anyone seeking employment with a Federal Law Enforcement agency, will need at minimum a bachelor’s degree.