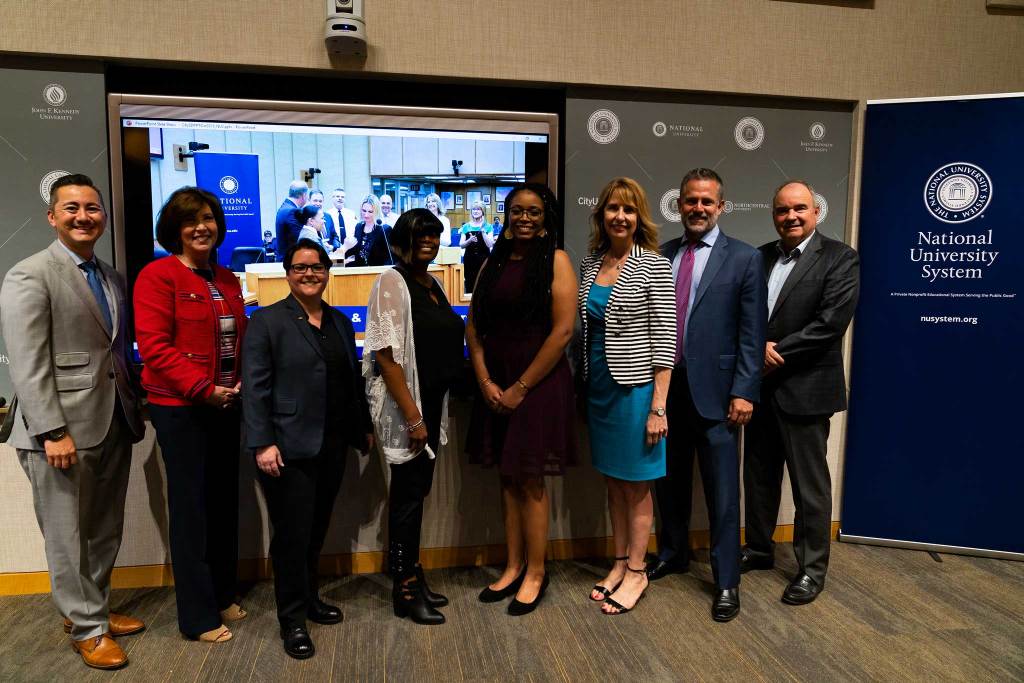 The three employees are part of the partnership’s wider effort, coordinated through the National University System (NUS) and its Workforce Education Solutions (WES) Division, through which all City of San Diego employees are offered a tuition scholarship, a portion of which is matched by tuition assistance. The partnership is being renewed for another five years — with the tuition scholarship amount being expanded to 20 percent — to provide continued access to an affordable, quality education for city employees who, in turn, serve and support the wider community.

“National University is proud to have served as the City of San Diego’s Preferred Employee Education Partner for the past five years, and we look forward to many more years in partnership,” said National University President Dr. David Andrews. “I am pleased that we can offer city employees access to a quality education through these scholarship opportunities that recognize their hard work and perseverance while they pursue their degrees.”

Kris Michell, the City of San Diego’s chief operating officer, agreed: “This scholarship empowers our employees to expand their educational opportunities, advance their careers and become even stronger leaders for the City of San Diego. Our team works diligently to serve and support our communities, and we are thankful for National University’s commitment to the City’s most important asset – our workforce. Congratulations to each of the 2019 scholarship award winners.”

While pursuing her Bachelor of Arts in Psychology at National University, Caldwell—who is the 2019 City of San Diego/National University Professional Development Scholarship winner, works as a word processing operator for the San Diego Police Department’s Crime Laboratory. In this role, she provides training for civilian and sworn personnel, trains new lab employees, and volunteers working in the front office. Caldwell hopes her newly learned skills will help her as she continues her education past graduation at National University at a polygraph school. Her ultimate goal is to become a full-time polygrapher for the SDPD.

“Furthering my education has been a goal of mine for quite some time,” said Karess Caldwell. “This scholarship will allow me to get closer to achieving that goal, while also being able to better serve the San Diego community. And while working full time and going to school is a challenge, the support I have received from National University’s faculty and staff has allowed me to be successful in the pursuit of my degree.”

Carrie Lindsay, the 2019 National University Presidential Scholarship winner, is a zoning investigator in the Development Services Department (DSD). Lindsay is currently pursuing her bachelor’s degree in public administration at National University. With a decade of public service experience, she has handled a variety of projects, including one that contributed to her division to transition to paperless tracking of requests for investigations. Lindsay believes her degree will allow her to further improve DSD operations, better understand government operations, and eventually move into a managerial role with the City of San Diego.

Glenda Evans—this year’s runner up and National University/Cal Coast Credit Union Scholarship recipient—is a water plant operator in the Public Utilities Department. She has been with the City of San Diego for 20 years and is also currently pursuing her bachelor’s degree in public administration at National University. She hopes her bachelor’s degree will help her gain a better understanding of how the public sector operates as it provides services to the community. Eventually, Glenda would like to become a mentor and a source of information for new hires, college students, and anyone who may be interested in a career in the water industry.

“We are very pleased to be collaborating with the City of San Diego to help support a need to expand educational and training opportunities for employees who serve such a critical purpose in the community,” said Chris Graham, president of Workforce Education Solutions at the National University System. “Ensuring access to our lifelong learners contributes to San Diego’s continued development as a place of opportunity and innovation.”

City of San Diego employees can chose from more than 100 program offerings at National University, which is one of the largest private, nonprofit universities in California, with the chance to pursue their dreams in specialties such business and cybersecurity. City employees interested in taking part in this program can learn more about their options here.

About the National University System